I came to India, in part, for the annual Global Inspiration Conference or GIC.  The GIC is the yearly gathering of the International Breathwork Foundation of which I’m a former co-President.   The chosen venue for the conference was the lovely Country Inn in Bhimtal about 180 miles from Delhi.

One hundred and eighty miles, no problem, leave Delhi in the morning, be in Bhimtal for lunch!

The cow taking a siesta in the middle of the eight lane highway out of Delhi should have been a clue, but it wasn’t.  I clung to my vision of lunch on a terrace somewhere overlooking the mountains.  Reality dawned only when eight lanes dwindled down to two, one in each direction, and the direction merely a suggestion.  This might take longer than lunch time. 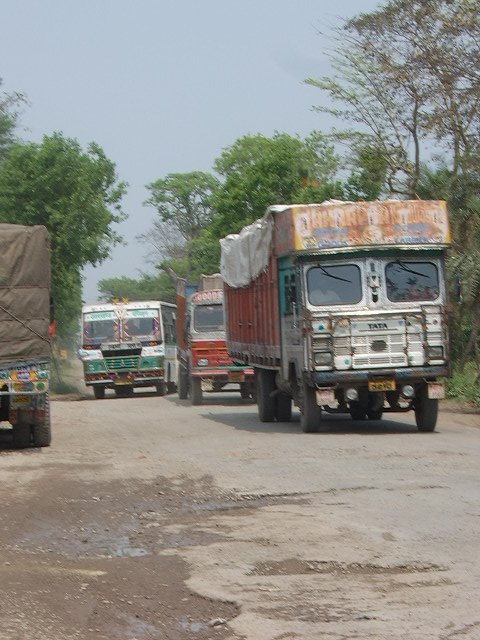 I’d heard about the traffic chaos in this country of 1.2 billion people.  There is surely a logic to the hair raising overtaking, the chaotic mix of animals and trucks, cars and bikes and wandering Sadus wrapped in saffron cloth.   But the pattern still eludes me.  Our bus bounced and swerved, stopped and started, overtook with inches to spare and was overtaken in the face of oncoming trucks.  Motorbikes with whole families on board wove in and out between busses and jeeps.  People and cows meandered back and forth across the streams of traffic.  All to the relentless honking of horns.

Total chaos.  Chaos that would shut down western motorways and autobahns.  Chaos that would generate road rage on a murderous scale.  But in three weeks of driving hundreds of miles, I never saw anger on Indian roads.  That, of course, doesn’t mean that tempers never flare.  I’m sure they do.  But in general Indians seem to work around each other, taking whatever happens as it comes, accepting what is.  Given the population density, there’s probably not much choice.

Some hours into the journey, I stopped flinching every time our driver pulled around a truck and played chicken with an oncoming car.  And I noticed the other conference goers on the bus had also begun to take the chaos in their stride, barely noticing collisions averted, pot holes circumvented.  We cheered when the bus finally pulled off the road into the lush gardens of the Country Inn.  But at that stage, nobody really minded that a 180 mile journey had taken eleven hours.

We had already begun to sink into India where traffic chaos is a master class in flowing with reality.