A sojourn in the Indian sub-continent has been one of my most abiding childhood fantasies.  By definition, a fantasy is a day dream, a personal home movie in which our imagination has complete directorial control.  India, in contrast, is a decidedly real and chaotic assault on all our Western senses, an assault so beyond our control we have no choice but to surrender to the onslaught.  My first lesson in surrender came as soon as I stepped outside Indira Ghandi airport into the sultry, 2 am Delhi night.

A friend from Ireland had booked a hotel room for us in Delhi.  I had the address.  All I needed was a way of getting there.  Outside the airport, I squeezed myself into the back of one of the tiniest taxis I’ve ever seen, bumped and dented and a complete stranger to a car wash.  On the rare occasions when I take a taxi, I make sure I know where I’m going.  Knowing the route gives me a sense of control, a little insurance policy against exploitation by the driver.  As we pulled out into the night in this city of around 17 million people, I realized with a touch of panic, that I had absolutely no idea where we were going.  And even if I did know where the hotel was located, I couldn’t identify street names or road signs.  I was completely at the mercy of the taxi driver. 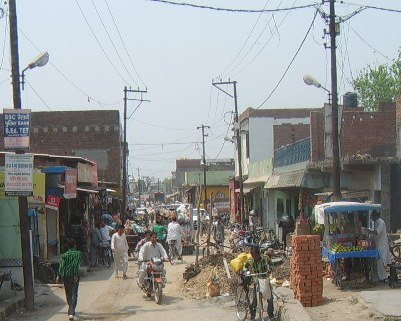 As the driver wound his way haphazardly trough narrow, dimly lit streets, each one more shabby than the last, my distrusting mind raced.  What if he took me miles out into the suburbs?  What would I do?  How would I even know if we were going the wrong direction?  How could I escape from the car?  If I did escape, then what?  Where could I possibly go?   I gripped my purse, arms tense, mind racing.

After half an hour, the car turned abruptly into what looked like a back alley full of shadows.  The driver dodged pot holes, swerved around things I couldn’t see.  Men clustered here and there, their grey forms outlined against blackness.  My heart raced.  Then the driver pulled up to a gate.

“Your hotel,” he announced and sure enough the sign above the gate matched the name on my friend’s e-mail.

Tension dissolved from my arms and chest, to be replaced with a vague sense of shame.   I would experience this over and over again in India with other taxi drivers, bus drivers, tuc-tuc drivers and with the young men who would fall into step beside me when I wandered through city streets, eager to direct me to wherever I wanted to go.  I didn’t trust any of them.  I had no choice but to depend on them.  And every one of them turned out to be helpful, trust worthy and kind.   I felt shamed by my lack of trust.