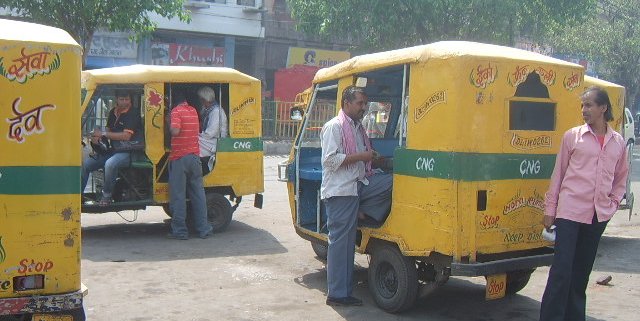 Getting to Delhi before dark was never a realistic option.  Three weeks in India is enough to learn that 140 miles in less than 6 hours is never going to happen.  The sun had long set when the bus pulled into what looked like a market square choked with people and tuc tucs, cars and motorbikes, and of course cows.

“Is this our stop?” Noor asked.

Somewhere, someone told us it was.  We got off the bus, grabbed our cases from the storage area at the back and headed for a bank of tuc tucs.  Within seconds we were surrounded by tuc tuc drivers vying for our business.  We chose one, the one that pushed the hardest.  He gave us a price so high it dawned on us that this had to be the wrong bus stop.  We were still 20 kilometers from our hotel.

The bus had begun to roll through the crowds.  We raced after it, shouting, dragging our wheely bags over the rough ground.  I reached the front and banged on the door.  The driver stopped and let us in.

“They why did…” Never mind.  Getting angry, sorting out the who and the why, demanded too much energy.  And to what point?

The next stop was the last for the bus.  All remaining passengers climbed down and disappeared into the night.  The place seemed deserted except for two other passenger from Europe and a man from Rishikesh.  The Rishikesh man climbed onto a wall behind us, said something inaudible and suddenly we were surrounded by tuc  tucs.  Noor and I climbed into one, negotiated a price and were off on the remaining three kilometers to our hotel.

Except the three kilometers seemed to be stretching and twisting into a tour of Delhi.  Just like my first night in the city, we’d no idea where we were or how to get to our destination.  In contrast to my first night in the city, we looked at each other and laughed.  Even when the tuc tuc driver stopped abruptly, abandoned his vehicle and disappeared into some buildings on the other side of the street, we sat and waited unfazed.  He’d return sometime.  And he did.  Carrying a bottle of whisky.

And so it went on while the tiny vehicle twisted and maneuvered through the crowed night.  Finally the tuc tuc came to a halt.  We looked up to see a friend from the conference standing outside our hotel waiting for us.

Nine hours after we climbed on the “tourist bus with working air conditioning” we reached our hotel safely.  Hot and sweaty but anger free, anxiety free, placid and peaceful as the cows that wander everywhere unhindered.  We had both learned to flow with the moment.

But would this extreme case of living in the present survive my imminent return to the US and a 40+ hour work week?